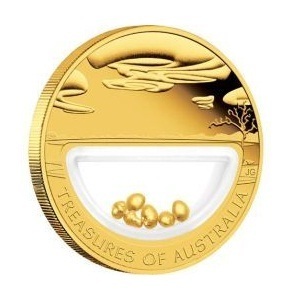 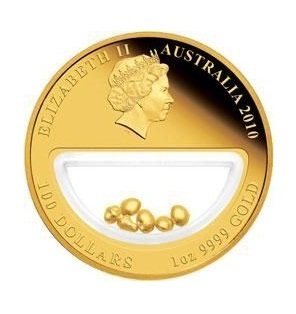 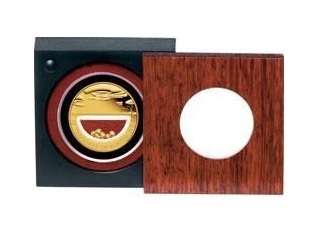 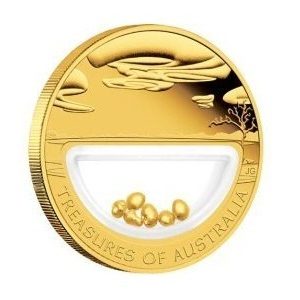 The Treasures of the Outback – six mini gold nuggets – contained in one superb and unique coin! Here is the fourth entry perhaps the most anticipated collector coin series ever released, the Treasures of Australia program! The Perth Mint of Australia has united pure refined gold with the allure of gold nuggets in this unique proof coin. The obverse depicts the source of these desirable riches – the stark, forbidding and sun-scorched landscape of Australia’s outback. Set within this vignette is a transparent capsule containing six mini gold nuggets, representing the treasure buried beneath the rock and sand. There’s Gold in Them Thar Hills! Few things in life can match the absolute thrill of discovery – and for discoveries, there’s nothing like the finding a huge gold nugget! This dream of every prospector is a very rare occurrence, but it has happened, especially during the famous gold rushes, including those that happened in California, the Yukon and Alaska, and Australia. Gold nuggets found naturally are never pure, or 24 karat, in composition but rather about 20 to 22 karat. Although gold nuggets found in Australia are often 23 karat or slightly higher, those found in Alaska is usually slightly less pure. The purity can be noted in the color of the nugget, the richer and deeper the orange/yellow, the higher the gold content. Purity is also described by “fineness”, with fineness stated as a decimal number, for example, .900 fine gold. Common impurities in gold nuggets are silver and copper, with a few containing platinum as well. Gold nuggets high in silver content are known as electrum. Huge Nuggets from the Outback Beginning in the 1850s, Australia experienced its own gold rush. The country is known for the incredible size and shape of gold nuggets found in the outback. Central Victoria is one of Australia’s premier gold detecting regions and is famous for its alluvial gold. Of the 40 nuggets weighing over 18 kilograms recorded in Australia, 32 have been discovered in central Victoria. Best known areas for the large number of nuggets found in the past are Dunolly, Moliagul, Rheola, Kingower and Wedderburn. Today, nuggets continue to be unearthed throughout this region. The largest gold nugget ever found, the Welcome Stranger, was found in 1869 in Victoria, Australia. Its gross weight was 3523.5 troy ounces, so it was more like a gold stone than a gold nugget! The largest gold nugget still in existence, the Hand of Faith, was also discovered in Australia, in 1980, by a metal detectorist. It weighs 874.82 troy ounces. The Mother Lode! Very few of us will ever have the opportunity to uncover the mother lode. However, a select few can now own the next best thing – one of these beautiful and amazing Gold Nugget coins! Each of the low mintage silver proofs contains 3 mini gold nuggets weighing a minimum of 1/2 gram of pure gold, while each truly rare gold proof contains 6 mini nuggets weighting a minimum of 1.0 gram of pure gold. The total mintage limit for the silver proof is only 7,500, while the limit for the gold proof is only 1,000! Investment Note There are only 1,000 of these innovative gold proofs in the entire world! Each contains one full ounce of four nines pure gold as well as an additional gram of six mini gold nuggets. We readily recommend this beauty as a long term buy-and-hold. Technology Note The marvelous minting and refining technologies of the Perth Mint have brought us this affordable gold proof, in a purity (99.99%) that puts other, lesser gold coins to shame! Obverse A stylized representation of the source of the beautiful gold nuggets contained within this coin – the harsh and unforgiving Australian outback, with the sun beating down mercilessly on the barren landscape. The legend reads appropriately TREASURES OF AUSTRALIA. Her Majesty, Queen Elizabeth II of England, in crowned profile facing right, above the clear capsule full of diamonds. This portrait, featuring Her Majesty wearing a tiara and pearl earrings, was executed by the sculptor Ian Rank-Broadley. The legend ELIZABETH II, the date of issue and denomination also appear. The legend 1 OZ 9999 GOLD guarantees the weight and purity. Packaging The coin is encapsulated inside an elegant, luxury presentation case with a native Australian jarrah wood lid, protected by a full-color outer box. An individually-numbered certificate of authenticity is included. Specifications Country Australia Mint Perth Mint of Australia Year of Issue 2010 ace Value 100 Dollars Weight 31.107 g Diameter 36.10 mm Gauge (Thickness) 3.00 mm Mintage Limit 1,000 Finish Proof Composition .9999 Fine (Pure or 24-Karat) Gold Edge Reeded (milled, serrated) Artist Justin Graham (obverse) Ian Rank-Broadley (reverse)